Barrier methods prevent pregnancy by blocking sperm from entering the uterus and reaching the egg. They are easily available, widely used and safe for most everyone including, nursing mothers, men, women, and teens. In addition, most of these methods do not require a prescription or doctor’s visit and can be found at your local grocery store. Some of these methods can be less expensive than other methods. Barrier methods are not as reliable in preventing pregnancy compared to other methods. 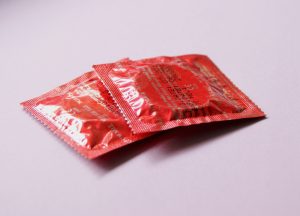 Male Condoms: Available in a variety of shapes, colors, thickness, and with or without lubricants and spermicides (a medication that kills sperm). Condoms are worn over the penis to prevent sperm for making contact with the vagina. This can help prevent pregnancy as well as protect from sexually transmitted infections (STIs). Condoms can only be used once and then thrown away. About 18 in 100 women will become pregnant during the first year they use this method. 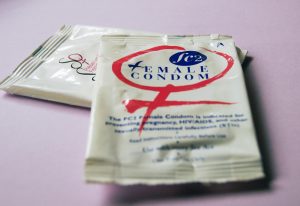 Spermacides: Spermacides are a type of medication designed to kill sperm. It comes in a gel, cream, foam, film, or suppository (solid form that is inserted into the vagina and dissolves).  This medication should be placed on at least 15 minutes before intercourse begins on or near the cervix (a donut like opening at the back of the vagina and the entrance of the womb). This method must be re-applied every time sexually intercourse occurs and is available over the counter. This method does not protect your from sexually transmitted infections (STIs). When used alone, about 28 in 100 women will become pregnant during the first year they use this method.

Sponge: This is a small pillow-shaped sponge that contains spermicide and should be moistened before use and place in the back of the vagina over the cervix. This can protect from pregnancy for up to 24 hours no matter how many times you have sex. It must be left in place for 6 hours after intercourse. It should not be left in place for over 24 hours because of the risk of infection. This method does NOT protect you from sexually transmitted infections (STIs). Among women who have never given birth, about 12 in 100 will become pregnant during the first year they use a sponge. Women who have given birth, about 24 in 100 will become pregnant in the first year of use.

Diaphragm: This is a dome-shaped rubber cup that is flexible and sits over the cervix (opening to the womb). Spermicide is placed inside the dome that sits against the cervix. The diaphragm must be placed before intercourse begins and is effective for up to 6 hours after placement. After intercourse, it should be left in place for 6 hours. you should not wear it longer than 6 hours. The diaphragm must be refitted by a doctor after each pregnancy or after any weight loss or gain of more than 15  pounds. About 12 in 100 women who use the diaphragm will become pregnant during the first year they use it.